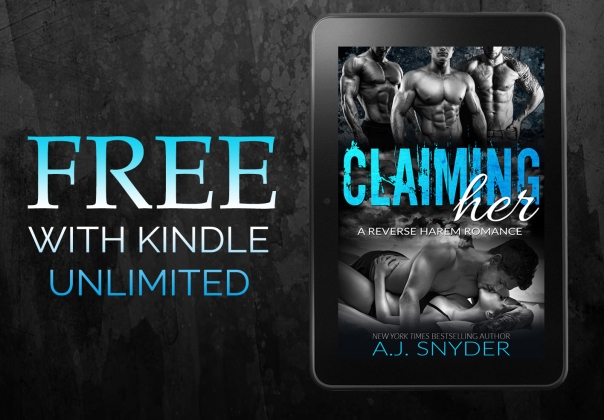 Claiming Her: A Reverse Harem Romance

The new flu vaccine that was supposed to save lives turned humans into bloodthirsty zombies instead.

For the past two years, Trinity Sanders has found herself fighting for her life in an apocalyptic world she never imagined would exist.

After she’s suddenly caught in someone’s trap, Trinity thinks her fate is sealed. However, when she wakes up in a strange house and in a warm bed, she’s surrounded by other humans, not the ravenous monsters she was running from.

The four handsome men who saved her are rough, rugged…and wild.

They’ve lived on their own since the apocalypse, surviving on the land and claiming whatever they capture in their traps, which now includes Trinity.

In a world with no rules, you claim what you want…

And they all want her.

Claiming Her is now live on Amazon and FREE with Kindle Unlimited!

Note from the author:  This is my first reverse harem/post-apocalyptic novel, and I will admit that it was not easy to write.  I totally went out of my comfort zone when I wrote this book…and you may too when you read it, but I promise you I made it the best book I could in this new-to-me genre.  I hope you’ll give it a chance and get a copy.  It’s free on Kindle Unlimited!

I turn coffee into books